Note: this is the abridged version of a much longer and more detailed technical blog post. If you find youself looking for extra detail, read it from the source.

One of the great things about Wanelo is that we encourage inventiveness of all sorts. Couple that with a bi-weekly hackday, and you get a lot of smart people coming up with a lot of really good ideas.

The project that’s the subject of this blog post does not fit in to the Wanelo roadmap, does not support our production infrastructure and, hell, does not even help with our automated tests. What it does do is make it 100% unambiguous when it is the right time to go the bathroom at our new office.

Shortly after we moved to our current space on Clementina Street in SOMA, the fact that the space has only two single-occupancy bathrooms, each on a separate floor, started to sink in.

I would imagine others had a similar experience as me: a couple times a day, when I really needed to use the restroom, I’d go to the downstairs bathroom only to find its door locked. I’d then run upstairs and find the other one locked as well.. Damn! I’d then come back down only find out that someone else had grabbed the first bathroom while I was upstairs. You can see how this would be a frustrating experience :)

Now multiply that frustration by 35 employees and every work day of the year, and you end up with an actual productivity problem.

Given my foray into Arduino over the last few months, I knew I could come up with a solution. I got approved for a small budget of about $200, and started looking around.

The problem was simple: people needed to know when each bathroom was occupied, or not. We needed something similar to the bathroom occupancy indicator on an airplane. Something everyone could see.

The first question on my mind was, “How would I let everyone know if one or both bathrooms are occupied?”. I decided to follow the familiar airplane concept and introduce a display unit which would be large enough, and bright enough, to be visible from most parts of our office. Luckily we have an open plan, so placement was not an issue.

By that time I was playing with a couple of Rainbowduinos which were driving 8x8 LED Matrix displays, and I was pretty impressed with the results. I immediately knew I wanted to use these to indicate the status of occupancy. Initially I thought the green matrix should indicate that a bathroom is available, while red would mean occupied. I basically went with this for the final version, although I added some lava-lamp like animations to make things more interesting. 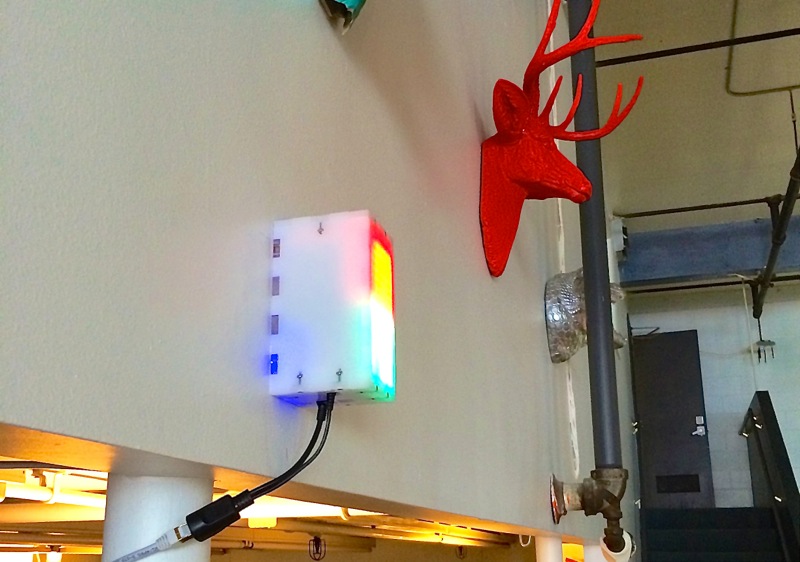 The next question was: How would the display unit receive information about the status of each bathroom?

This part was easy. I picked up a few nRF24L01+ radios for very cheap. The excellent RF24 communications library has some of the best Arduino C++ code I’ve seen, and so it instilled confidence in this approach. A quick test of the radios at work showed that they are more than capable of reaching through the walls.

The last problem was about actual occupancy detection.

And this is where things got quite a bit more tricky.

I brainstormed with a few folks on many an option. We discussed:

It was clear to me that a combination system was needed. Something that not only relies on light or motion detection alone, but uses a combination of multiple sensors. Pretty soon, I settled on using just these three:

Shortly after, I received all the pieces in the mail, had a plan in my head, and was ready to proceed with the implementation. 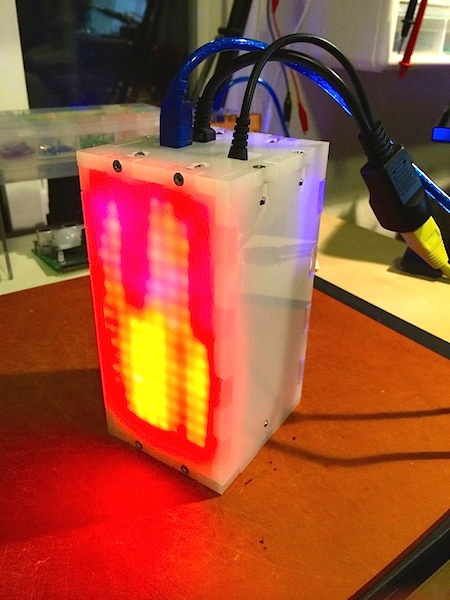 Enter the project (all of which is open sourced under an MIT License), which took a good month’s time to complete working some nights and weekends: BORAT: Bathroom Occupancy Remote Awareness Technology. As should be clear by now, BORAT is an Arduino-based toilet occupancy notification system. It uses inexpensive wireless radios (nRF24L01+) to communicate the occupancy status of one or more bathrooms to the main display unit located in a highly visible area.

You may be asking, why in the hell does the observer unit (which determines occupancy) need sonar? Well, if you’re like me, you like to take your time when you are… you know. Perhaps I don’t move very much during this time. Maybe I’m reading my phone. This would cause the motion sensor to eventually give up and show a green light. How many times have you had an automatic light go off on you while in a public bathroom alone?

This is where sonar comes in. Aimed directly at someone sitting on the toilet, the sonar will read a different distance with a person there versus without. You can configure the threshold after installing Observer, and—voila! Near 100% accuracy! Is it creepy to have a two-eyed robot staring at you in the bathroom? I’ll leave that question to the reader.

Wanelo can’t live without this technology now. It’s amazing how quickly humans get used to things that are useful.

Here is a diagram that explains various placement options and the overall concept. 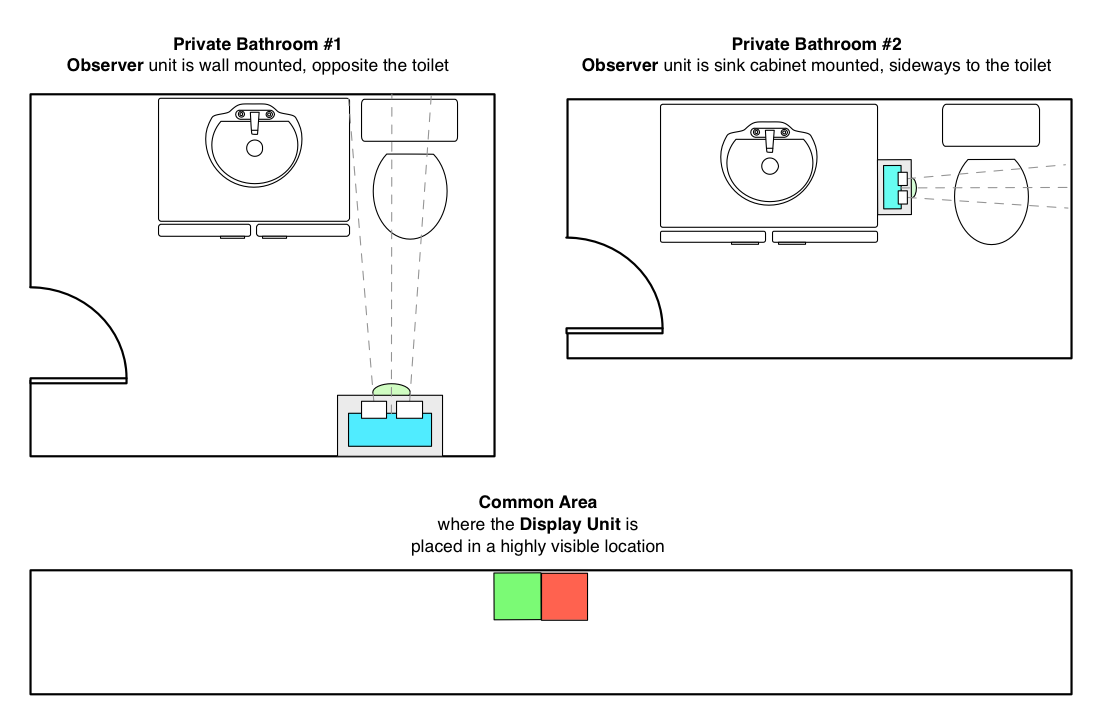 Observers are responsible for communicating a binary status to the display unit: either occupied or available. The display unit also has third status: disconnected, for each observer unit. But Observers don’t have that.

How do Observers determine if the bathroom is occupied? They do so based on the following logic:

All settings and thresholds, including timeouts, are meant to be tweaked individually for each bathroom. This is why Observer units contain a rotary encoder knob and a connector for external serial port. This is meant to be a Serial LCD Display used only to configure the device. More information about this feature is available from the original blog post .

The diagram below shows the components used in each Observer unit. 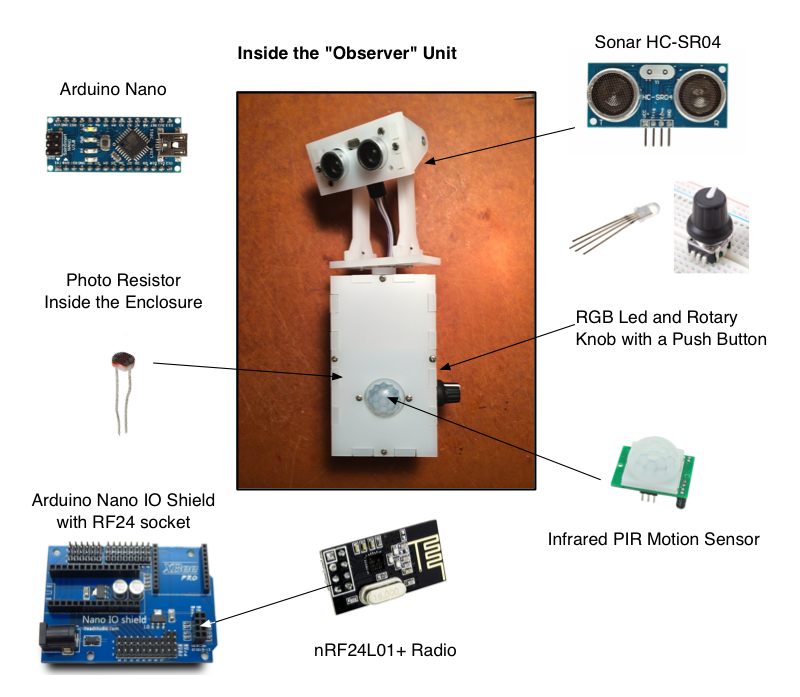 What’s the moral of the story? Who am I kidding.

It sure is nice to know if you can or can’t use the restroom, without having to get up from your desk.

Could have this been done cheaper? Absolutely! Smaller? Definitely! Neater, prettier, faster? You bet.

But I had a lot of fun along the way, and it’s been such a pleasure to work with “atoms” rather than “bits” for a change (although you could say this project required a good deal of bits too :-)

And now it’s a relic of Wanelo culture that is frozen in time. Forever. No, Really.